Janet Zuccarini is the sole owner and visionary behind Gusto 54 Restaurant Group. Janet stands out as a woman and powerhouse entrepreneur in the restaurant industry, curating innovative and delicious dining experiences on a global scale. An adventurous traveller, Janet has her finger on the pulse of the world of restaurants and food.

In 1996, she opened Trattoria Nervosa in Toronto’s Yorkville, later expanding to Gusto 101 (2012), and PAI Northern Thai Kitchen (2014). In 2015, Gusto 54 Catering & Commissary was added to the growing roster. 2017 was a year of rapid growth for Gusto 54 with Kiin, Chubby’s Jamaican Kitchen, and Los Angeles-based restaurant Felix, which was lauded as Esquire’s “#1 Best New Restaurant in America," Eater LA’s “Restaurant of the Year,” and shortlisted as a finalist for the James Beard “Best New Restaurant 2018” award. Newly launched this year is Gusto 501 in Toronto’s Corktown, soon-to-be followed in 2020 by Gusto Green (Los Angeles), Azhar (Toronto), and Stella (Beverly Hills). With each concept, Janet strives to create a transporting guest experience, complete with inspiring design, delicious food, and soulful hospitality, as well as to continue to be recognized as an awesome place to work.

In 2017, Janet was recognized as Foodservice & Hospitality’s Pinnacle Award winner for “Independent Restaurateur of the Year” and, among thousands of candidates across the country, was selected by the RBC Canadian Women Entrepreneur Awards as the recipient of the TEC Canada Award for Excellence in Entrepreneurship. In 2019, Janet was named as Businesswoman of the Year by the Italian Chamber of Commerce. In addition to these accolades, she also happens to be the first woman in Canada to become an AVPN certified Pizzaiola, and is featured as a Resident Judge on Top Chef Canada.

Recognized as a Deloitte Best Managed Company, the empire that Janet and her team have built is notable not only for the successes it has seen to date, but also for its contribution to community-building programs that support women and children. Gusto Gives Back – the charitable arm of Gusto 54 – oversees homegrown “Mini Chefs” programming as well as regularly contributing to organizations like Foodshare and The Stop that feed and teach people to eat in healthy and sustainable ways.

Janet holds an MBA from Boston University in Rome where she lived for 8 years.

Please note that reservations requested online are not final until confirmed by our team.


We will hold your table for 15 minutes. If you will be later than 15 minutes, please give us a call.


If you need to cancel, we ask that you do so at least 24 hours in advance. 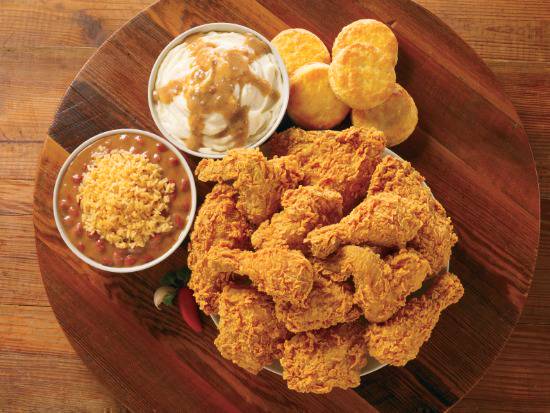 Whether spicy or mild, our Bonafide Chicken is marinated for at least 12 hours, then hand-battered, hand-breaded and bursting with bold Louisiana flavour. Includes two regular sides, biscuit, and drink.